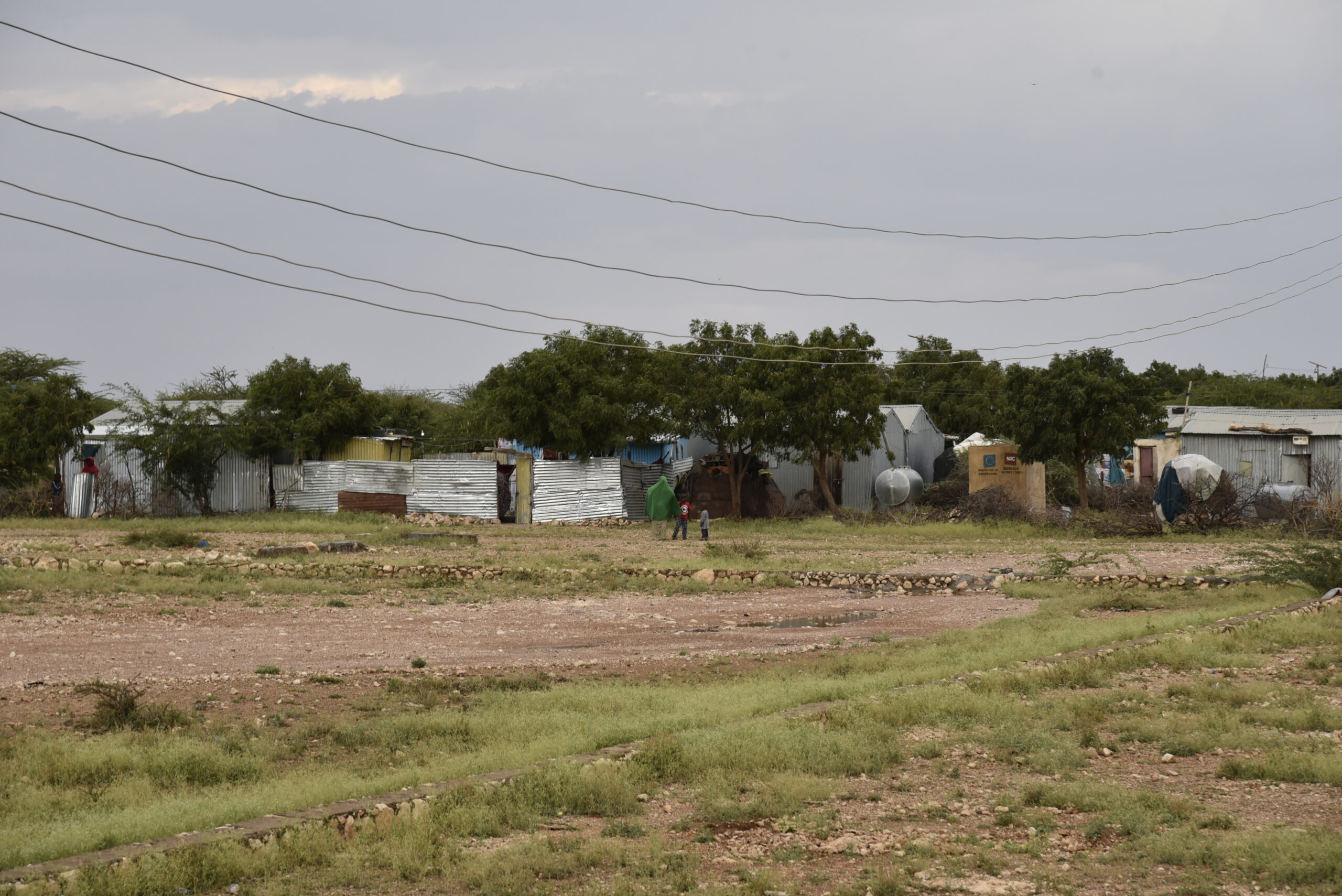 Toilets constructed by the Norwegian Refugee Council in Digaale

Universal access to infrastructure is among the core ideals of modernity, a symbol of development and progress. Material connectivity and uniformity, through what Gandy labels a ‘closely choreographed intersection between technology, space and society’, shape our imageries of modern cities. Inclusive infrastructural development also features prominently in several of the Sustainable Development Goals (SDGs), including SDG11, the promotion of sustainable cities and communities. Yet, in most cities of the world, infrastructure is neither strategically planned nor uniformly delivered but rather composed of heterogenous and fragmented pieces that a broad range of actors, including urban residents themselves, cobble together, maintain and repair, often on a daily basis.

Various forms of infrastructure are often at the centre of everyday contestations over the ‘right to the city’. Among the mundane and often overseen types of infrastructure – yet like water or food a matter of life and death – is sanitation. As scholars such as Desai et al and Jewitt have argued, beyond associations with modernity, the provision and use of sanitation infrastructure also carries ideas about dignity and facilitates emotions of shame or disgust. Bodily waste carries enormous symbolic significance.

In Somaliland, people who live in camps at the urban peripheries, as well as those who pay rents to private landowners for the establishment of makeshift shelters in more central parts of cities, need to obtain permission from landowners if they also want to dig a latrine – a permission that is not always granted. At times, international organisations support access to sanitation. As one person in focus group discussions in Daami, a marginalised settlement in Somaliland’s capital city Hargeisa, explained:

“There once was an organisation that supported the digging of latrines in the neighbourhood. But support was not sufficient. They said that every five households [with an average of 6-7 members] should share one latrine, and that was not possible. Finally, the latrines were taken over by the owners of the land. The landowners put fences around the latrines and made them private.”

Making toilets private means either that people lose access or, in some cases, that they have to pay the landowners if they want to use toilets. Residents without access to toilets were trying to regulate their bodily functions in ways that allowed them to protect their privacy and dignity. For example, they used designated places at selected times. A man who lived in Hargeisa’s Mohamed Moge settlement, said: “Everybody, including children and adults, goes to the bush toilets.” He also explained how adults wait till sunset to compensate for the lack of privacy, as the place people use is “an open area, there is not a single tree there.” Thus infrastructure, or the lack of it, determines the rhythm of urban life.

Even if permission for latrines is granted, urban residents often lack the means to empty filled up latrines. If possible, they often just abandon these latrines and dig new ones. A woman living in the Statehouse neighbourhood in Hargeisa said that in a short time her family’s “embarrassment will emerge,” as their toilet was full and would not be usable much longer. Furthermore, not all settlements have the space for new latrines. She explained:

“We have challenges with toilets. We even don’t have roads to transport a body in case someone dies in the camp. That’s not good, is it? There is a narrow road which passes in front of my house, but it does not go beyond my house… If your toilet is filled up, there is nowhere [for it] to go because the compound is made up of your house and the toilet and nothing more. If we stay in this situation beyond this year… It is bad for our lives.”

This description of the difficulties of vehicular access to the overcrowded Statehouse highlights the networked character of infrastructural configurations, even if they are heterogenous and dispersed. The failure of one infrastructure, in her case roads, leads to the disruption and malfunctioning of others, such as sanitation, garbage disposal or even the burial of corpses.

Mundane biophysical activities – eating, drinking, excreting, and dying – are facilitated by infrastructure and technology. Sanitation, therefore, is part of networked configurations that cobble together ‘socio-ecological and techno-natural processes’ while enabling urban circulation and growth. Disruption of one configuration nearly always has effects on others. Challenges in accessing basic infrastructure serves to show how they are embedded in relations of power. Negotiating access is part of mundane daily practices that shape how cities are made, unmade and remade.

Jutta Bakonyi is Professor at Durham University and a member of the Inclusive Urban Infrastructure (IUI) team. IUI is a project funded by UK Research and Innovation through the Global Challenges Research Fund under the title ‘Towards Trajectories of Inclusion: Making infrastructure work for the most marginalised’ (grant reference number ES/T008067/1). This blog post is based on a chapter in Bakonyi, J & Chonka P (2022) Precarious Urbanism: Displacement, Belonging, and the Reconstruction of Somali Cities, Bristol University Press (forthcoming), as well recent focus group discussions conducted through the IUI project.