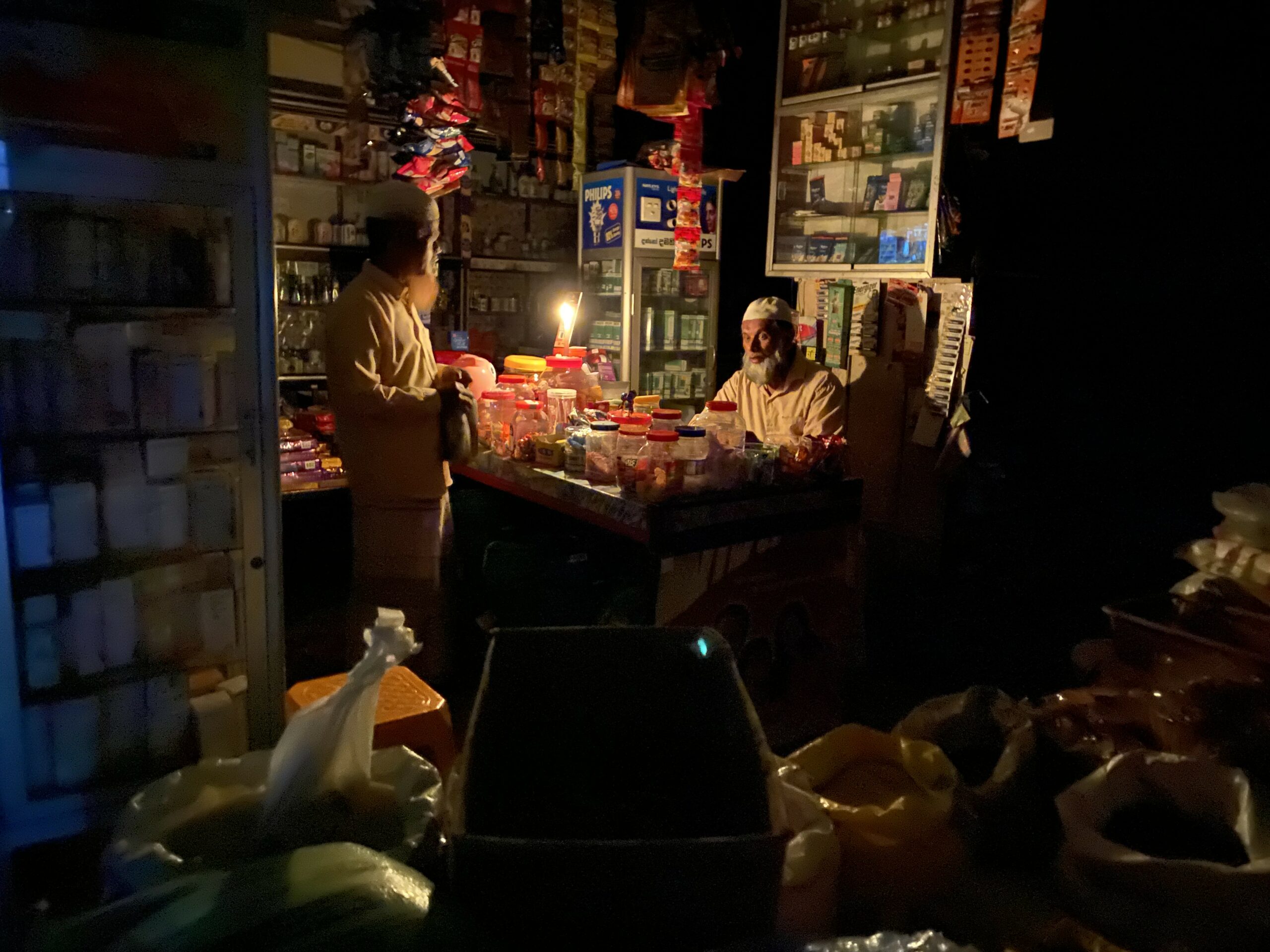 A grocery vendor illuminates his shop with candlelight

Sri Lanka has been facing an energy crisis since 3 December 2021, with massive shortages of electricity, as well as fuel (petrol and diesel) and household gas cannisters. According to the authorities, this crisis is due to an inadequate supply of fuel (coal and oil) for thermal power stations in the absence of rain for hydro power generation. Thus Sri Lanka’s state-run utility provider, the Ceylon Electricity Board (CEB), has been imposing power cuts on a rotational basis.

Although Sri Lanka’s leadership assured its population that the power outages will end from 5 March, they went from 4 hours a day to as high as 13 hours a day; at the time of writing outages are scheduled to last for 6.5 hours a day. People from all walks of life have been affected. Children faced with term tests and Ordinary Level examinations (already delayed due to COVID-19 lockdowns last year) cannot study during the night. Older persons and those with health problems are also particularly struggling during the long stretches when there is no electricity.

Power cuts have forced small business owners to shorten their business hours or close early. For example, some vendors in Colombo are only opening their shops before 8am and after 2pm (as they rarely have electricity between these times). Many of these vendors cannot afford generators; in any case for several months there have been long queues for diesel and kerosene, the two fuels that power generators.

With the gas cannister shortage and sudden rise in fuel prices, some urban dwellers are resorting to using firewood for cooking. Using firewood in poorly ventilated urban homes is particularly dangerous for children (whose organs are still developing) and women (as in general it is the latter who are responsible for preparing food). Yet, as noted above, the only alternative is to wait for many hours in queues at fuel stations to obtain kerosene.

Our recently concluded baseline survey shows that 95% of households who live in underserved communities have a proper electricity connection. Due to COVID-19 lockdowns, the CEB did not issue monthly invoices. Instead service users were asked to pay a lump sum amount after the last lockdown. But many people cannot afford to pay such a large sum in one go. In spite of this, failing to pay caused service users to be disconnected from the grid. To make matters worse, reconnection involves having to navigate substantial bureaucracy and pay huge charges.

At one point, the Prime Minister requested all local government leaders to turn off street lamps until 31 March to conserve energy, telling them this was a ‘national duty’. But many expressed concerns regarding how this may impact upon the safety of women and children. Many women tend to work night shifts in garment industries, supermarkets, nursing homes, etc. Street lighting can help them to commute safely. Moreover, roads in the country, especially in Colombo, are not in sufficient condition to travel in low light. A study conducted by the World Bank on the safety of infrastructure in Colombo Municipal Council shows that only 52% of this area has been rated good in terms of overall lighting. The authorities should at least illuminate the streetlights in a zigzag pattern to save electricity. In the medium-term, it is necessary to transform all streetlights to solar ones.

At the same time, prolonged power outages affecting the national grid mean that mobile subscribers experience regular interruptions in network connectivity. Service providers claim that their base stations are equipped with backup power systems to provide uninterrupted connectivity. However, due to limitations in some tower sites that cannot be operated with backup generators, or due to constraints in deploying adequate backup energy systems, people across the country have been struggling to make calls and access the internet.

The authorities should have made adequate plans to supply electricity, in line with their demand management forecasts, without disrupting the livelihoods of people. Those who manage foreign exchange allocations do not seem to understand the foundational nature of energy. If only they had initiated manageable power cuts (around 1 hour per day) in the middle of last year, Sri Lankans would not be experiencing this sort of crisis today. Policymakers must stabilise the energy situation as soon as possible. Without energy there is no economy.

Abdhullah Azam is Project Manager at the Centre for Migration Research and Development (CMRD) and a member of the Inclusive Urban Infrastructure (IUI) team. IUI is a project funded by UK Research and Innovation through the Global Challenges Research Fund under the title ‘Towards Trajectories of Inclusion: Making infrastructure work for the most marginalised’ (grant reference number ES/T008067/1).